Two years ago my friend Brian died. He was climbing on Cathedral Ledge, doing laps on a route I’ve been on countless times before. I was in Peru at the time, a long way from home, a long way from the people I turn to when things get difficult.

I had plans to spend eight months in South America, plans to bounce from Peru to Chile to Argentina and all over and up to Central America. But it didn’t fit. After a month traveling in Chile I flew home.

Instead I went climbing: Red Rocks, Zion, Eldo, Rifle. Looking Glass. Rumbling Bald. The Obed. I wandered through 14 states over five weeks, clipped bolts, jammed cracks and hung on gear. I got scared. I got lost. I fell. I saw old friends and made new ones. I took the type of trip Brian loved taking. He and I had discussed a trip to the desert or to Yosemite, though it never happened. But I felt a connection to him out there, a recognition that “gone” and “with us” can be indistinct.

A month ago was Brian’s birthday. Facebook was kind enough to remind me. It popped up in my feed like he was still here, like I should send him a card or a gift. But he’s not.

A few weeks earlier I made it to one of the desert towers Brian and I talked about. The North Face of Castleton is a beautiful 5.11- up steep orange rock. My friend Jim just happened to be in Moab at the same time as me, and it was his birthday. He put a post on FB asking if anyone wanted to climb the next day. “Seriously?!” I said. “You’re in Moab?? Let’s climb Castleton!”

We met the next morning around 10 a.m. and drove to Castle Valley. It was noon by the time we reached the route, but at only three pitches we figured it would go quick. I took the first lead, a steep blue Camalot crack that ended in thinner cracks through a patch of white calcite. Two guys were repelling off as I started up. “Mountain Project says you need 6 number threes,” one of them said. We had two. Jim looked at me. “Maybe leapfrog that one below you?” I heeded his advice.

But the crack was straightforward, the climbing uncomplicated. I jammed and I jammed, making quick progress. I hit the calcite rested and laughing, enjoying the movement and exposure. No wonder Brian so loved such places—the red of the sandstone gleamed, and every jam felt handcarved. This was climbing at its best. 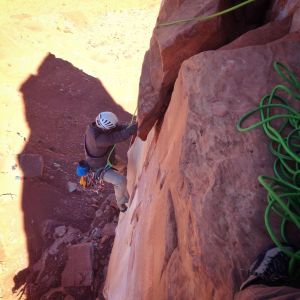 Jimmy followed, pushing his way up the final exposed crux with a grunt, and we scampered up two more pitches, both excellent.

From the summit the Valley ran off in every direction, a landscape carved out from the red stone with snow-covered mountains as a backdrop. It felt like paradise, God’s country, the kind of place Brian would smile at.

There is a photo of Brian taken on top of another tower. He is sitting, his legs outstretched, writing in the summit register. A valley spills out below him. The sun is high, the sky blue. It looks peaceful. This is how I like to remember him. He was joyful, at ease.

It’s been nearly two years since Brian fell. I’m on another trip, roughly 20 states in, another handful of climbing areas. There has also been surfing and freediving and random beach visits. And yet this still feels like an homage to him. He keeps popping up. I started this post a year and a half ago, while I was on that first trip. It came back to me today, begging to be finished. I couldn’t ignore that call.

There is a sense of being lost in wandering, but there is also an open door, a chance to be reminded of people, events, places that otherwise fall into darkness. So quickly we forget, but wandering we remember. Some of that can be painful. Other parts are beautiful. Perhaps every visit to the desert will in part be Brian’s. I hope so. I see him in the beauty of the landscape. I feel blessed to share it with him. It may only be in my heart, but that is enough.