I’ve been writing bullshit about climbing for years.

I write about handjams, pick placements and descents, about hauling and bivying, rope recommendations and runouts. The truth is it’s all bullshit.

I don’t climb for the summit or the send. Those are just excuses. The reasons I climb are Scott, Ryan, Peter, Michael and Paul. Josh and Juliet, Paul and Sasha and Jim. Katie and Majka and Jay. Pat, Jack, Adam, Silas, Ray, Elliot, Bayard, Eric, Brent and Jay. Chuck, Michael, Chris and others. People I forgot, others I don’t even know, names I don’t recall. Those are the reasons I climb.

I have been swimming upstream for months now, struggling against something I’m not even sure I fully have my hands around. It catches me at home, at work and in the car and takes me down. It knocks me off my feet and leaves me screaming, crying. In a moment it can rip me ragged, but when I get to Shagg, Shell, Cathedral or Cannon with one of my reasons none of it matters.

Yesterday was that way. Friday night I didn’t sleep. I ate consistently last week for the first time in a month, but that ended Thursday night. I met Ryan and Michael in a parking lot in Jackson at 7 a.m. Saturday. Ryan left Western Massachusetts at 4 a.m. to join Michael and I without asking us to delay our start. I offered, but he said no.

The two of them piled into my car, and we rolled uphill to Pinkham Notch. On the way up we joked, but once we started up the Tuckerman Ravine Trail I began talking. As we hiked I unloaded my pain, frustration and exhaustion. They just listened. We hiked fast, passing party after party. At times I didn’t want to keep talking, but I couldn’t stop. I kept at it until we got to the ravine, at which point I had to sit down. I felt like I’d lost a quart of blood. The weather matched my mood.

When we got to the base of the route I asked if I could lead the first two pitches. I wanted to warm up on the first pitch and then be fresh for a shot at the crux. Neither Ryan or Michael hesitated: Of course, they said.

I never stopped to belay. I had enough rope at the top of the first section to launch into the crux, and I took it. I had an outlet, and I was blasting for the moon.

The rest of the day went smoothly. Michael took the next pitch, then Ryan got the third, and we topped out around 2 p.m. We packed our gear, stripped off our crampons and walked down. I walked silently, knowing with each step I was closer to re-entering orbit. Ryan and Michael carried the conversation, allowing me to drift inside my head.

When we drove back into Jackson they invited me to dinner, but I declined. I’d had enough for one day. I needed to get home and brace myself for whatever was coming next.

A few hours later I got a text from Michael: “Proud work today. Killed it.” 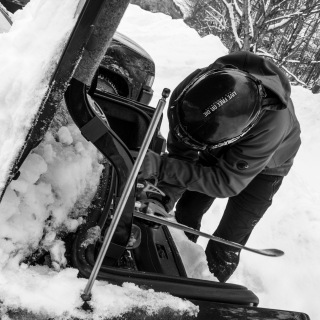 I didn’t feel like I killed it. I felt like I got up, stepped out of bed and start falling. I fell all day, and I was getting ready to crawl back under the covers when his text arrived, sleep serving as my only net. I’m not crushing, I thought, I’m getting crushed.

But every few days I meet one of my reasons for climbing, and I stop falling and start flying. With Scott and Peter as copilots I get to crush, if only for a few minutes on Wednesday morning in the Cathedral Cave. With Paul I get to launch off the bouldering pad into the stratosphere, even if I never make it past the rock gym rafters.

Climbing is not about summits or redpoints, it’s about partners. It’s about sharing a rope with someone who can save your life. And that isn’t limited to when you are in the mountains.

We are astronauts, Peter says, and we are going to the moon. Thank you Peter, Scott, Ryan, Michael and Paul, for shepherding me. Without you I’d have missed my target. Alone I’d be lost in space.

[Author’s note: Peter reminded me that his references to astronauts and the moon were originally coined by Colby Coombs, the founder of the Alaska Mountaineering School.]