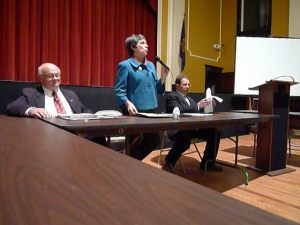 I’d like to thank all the councilors and candidates who made the debate happen, and everyone who came out to watch and to learn. I hope it helped make up some voters’ minds. (I also admit, I’m not event organizer, so that it didn’t have more hiccups than it did was surprising.)

I recorded the entire mayoral portion and will post it on here as soon as I can. I didn’t record the council comments because I ran out of space on my card, and unfortunately I missed one of the most interesting speakers of the evening, Councilor David Poulin.
Councilor Poulin made rapid-fire comments on almost every issue the city faces, supporting the current council and dismissing the challengers. It was funny, pointed and well-delivered. Because I won’t be writing about it for next week’s paper (which won’t come out until after the election) I wasn’t taking notes and therefore don’t feel I can adequately report it. But suffice to say, it was quite a speech. Someone commented city meetings might be too boring for people to attend. Moments like that, however, are why they’re worth attending. His speech, as much as the mayoral debate, made the event worth attending. I just feel bad for those people who left before they could watch it. And I feel bad I didn’t bring a second memory card.

Update: I didn’t comment on this much last night, because I was tired and had a long day planned for today. But I just wanted to say both Mr. Grenier and Mr. Bertrand did an excellent job answering the questions. I think they both came off very well and made persuasive arguments for their positions.
I know many people I’ve talked to are frustrated with Mr. Grenier, usually for two reasons: the ad in the paper featuring the burned Main Street building, and his aligning himself with Mr. Rozak and Mr. Danderson. I spoke to several people today who decided not to vote for him specifically because of one or the other of these issues. Last night, however, he made strong arguments why voters should consider him, even if they aren’t willing to vote straight ticket.
I asked Mr. Bertrand a week ago if he had the fight in him to run in a hotly contested election. Last night he proved he does. Councilor Mark Evans said he didn’t think his performance played well. He said he thought Mr. Bertrand came off as frustrated. Someone else told me today they were pleased to see him show some passion and emotion. I lean to the latter, but I can understand the former.
After the debate, I’m impressed with the caliber of both candidates. Honestly, I don’t agree with Mr. Grenier’s strong support of the Laidlaw project, but I also don’t agree with Mr. Bertrand’s outright rejection of it. I agree with the forward image this council has pursued, but I understand Mr. Grenier’s steadfast defense of the city’s roots. I don’t think people can be argued into trying to change the city’s image—they have to be persuaded to come along. This council has been moving forward with great strides, and they may have lost touch with some of the people not so ready to run towards the future. The council has noble goals, and they have to make sure to include those people without such progressive views in order to maintain their support.
Mr. Grenier’s experience of being laid off from the mill at 41 is not one to be taken lightly. He is right, the Fraser mill is employing people who do not fit in the 21st century economy. It is important the city preserve those jobs. The council has been doing that, but without the emphasis Mr. Grenier deems appropriate. That is a very important point.
There are the jobs for people in Berlin now, and the jobs for people in Berlin in the future. I don’t know how to supply either or both, but that’s the task for whichever man should become mayor.

I didn’t know Mr. Grenier before this election, and our first interactions included some friction. I have spent a lot of time with this council, covering every Monday night meeting, and I am friendly with all of them. That has affected my opinion, but it has not affected my reporting. It is a good lesson, though, that people shouldn’t criticize people at meetings they weren’t at. I sit in all the council meetings, so I know how hard this council worked. I don’t consider people who say the council hasn’t been doing anything to be very well informed because I watch them work diligently every week.
The flip-side is also true, however. The reporter from the daily covered council when Mr. Grenier and Mr. Danderson were their, and she likely dismisses the current council’s claims that nothing happened under that administration.
These are all good people, doing a job to the best of their abilities. Either Mr. Grenier or Mr. Bertrand would represent the city of Berlin well.
I’m interested to see how democracy plays out for the city, and how that in turn plays out in the future. I’ll be prepared in the future to dismiss criticism of the current council’s term in office, because I sat in every meeting. Hopefully this will teach me to look at all such criticism with skepticism, and I’ll continue to keep of my opinions to myself. The people of Berlin should decide this election; my job is to let them know where the candidates stand. It will be interesting to see what they decide on Tuesday, and which of these men is left standing.