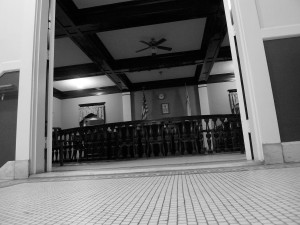 Tonight’s city council meeting was awesome. Great. Phenomenal.
Councilor Dick Lafleur made it clear he was unhappy with the other councilors for not making the meeting last Monday.
“The greatest responsibility of every public official is to be here,” he said.
Councilor Lafleur was appointed to fill the mayor’s role for that meeting, but only Councilors Ron Goudreau, Tom McCue and Mark Evans joined him for that meeting. Councilor Lucie Remillard called in sick and Mayor David Bertrand was on vacation, but the other councilors were unaccounted for.
I’m not sure what protocol is in that situation, but Councilor Lafleur was clearly not happy with the outcome. He said he was angry then and now, and that he was embarrassed by the situation councilors put him in.
Mayor Bertrand tried to reel him, asking what the remarks had to do with the budget, but Councilor Lafleur said the budget was of utmost importance and councilors had neglected their responsibility to it last week. He then continued with his comments.
Councilor David Poulin asked the mayor if he was going to bang the gavel or if he should hit Councilor Lafleur with it. He said he was not going to be lectured to about his decisions, that he had good reasons for missing the meeting, and that it was disrespectful for Councilor Lafleur to speak to his fellow councilors that way.

I pulled out my camera right at the end and missed getting it on tape. As someone who enjoys political theater, this was rich stuff. I’m sorry I don’t have a visual record of it to share. I might know someone who has audio of it, however, and I’ll see if I can’t get it up here. This was the second YouTube worthy display by Councilor Poulin—I’m going to have to keep my camera ready when he’s around.

This group has worked well together in the time I’ve been covering them. Councilors Lafleur and Poulin seem to taunt each other every once in a while, but this was the most hostile tone I’ve seen between sitting councilors. Up until now they saved it for opposition candidates.

The atmosphere of city council seemed to change about the time the election got heated, and I’m not sure it has settled since. I’m also not sure it will settle any time soon. Councilor Poulin ended the meeting by saying he wanted to buy all the stationary featuring the stack in the seal to get rid of it as soon as possible. Since Mayor-elect Paul Grenier has made it clear he wants to reinstate the old seal it is hard not to see this as a slight to the incoming administration.

After such a hard-fought election, where both sides clung to visions of Berlin’s future that are in many ways irreconcilable, it will be interesting to see how things move forward. Mr. Grenier told me he expects everything will smooth over rather quickly; I’m not so sure. If Councilor Poulin’s statement about the paper is any indication, some of the remaining councilors are preparing for a fight.