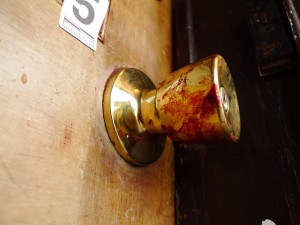 After a few comments about sensationalism, and then an opportunity for truly sensational reporting, it couldn’t be a better time to talk about the subject.

This is a photo of the door knob not at the house on Third Avenue, but at the house on Western Avenue where they found the man now in the hospital. I knocked on the door to see if I could find someone to talk to about the incident on Friday, and then I noticed the blood. Not just on the door handle, but on the door, the floor and the window. It won’t appear in the paper, because any blood is too much for a local weekly like the Reporter, but it’s worth posting here for discussion.

What level or “right to know” do people have? What level of self-censorship should papers exhibit? A dead body would never make it into the local paper, but there are heated debates about publishing photos of caskets returning from Iraq and Afghanistan. How are those discussions separated? Should they be? The funeral for man who was killed is today, and many papers would expect at least a photo. Is that appropriate? How do you react when you see something like that in the paper?

I have no interest in covering shootings. I love to follow the debates and politics, the policy discussions, and tensions between opposing sides in any forum. It is fascinating the agreements people reach, particularly in a small community, because, as one local public official told me recently, the person you are shouting at during a council meeting might be up pulling you out of a ditch the following night. This is an environment ripe for compromises.
Those debates are an integral part of reporting. They are the essence of politics, and I’m always psyched to cover them.

But then someone gets shot. I am the person covering Berlin for my paper, so of course it is my story. I was knocking on people’s doors at 616 Third Ave. in the rain on Friday, thinking how glad I am this is a rare occurrence in Berlin. I heard facts and details that won’t make the paper, and really don’t need to. What is the public’s right to know in this regard? Why do people care about? As a reporter out asking the questions, I had to wonder.

But as a consumer of news, I want to know what is going on. The incident that unfolded in Seattle yesterday, for example, is powerful and nationally significant, and I hope reporters don’t stop covering such stories. Maybe it’s just the wrong beat for me—I know lots of people who dread sitting through a planning board meeting.

I can’t affect any meaningful change by reporting on the shooting, and so I have trouble seeing the value in my doing it. It isn’t like it’s maintaining the press’ watchdog role to find out who shot who. No additional information about the gunshot wounds or the assault the preceded the shooting will do anything to keep a 23 year old man from having died on the street. The social pressures, the economic disparities, the societal influences that led these men to invade a home interest me; the direct result of the incident does not. Reporting about corruption or starvation or war, where someone can still do something to make it better makes sense to me, but it’s hard to see how this story will help people avoid a similar fate.
Other reporters don’t share my view on this. I heard one colleague got a phone call from a friend congratulating them on covering their first shooting. That would be a call I would not take.

City Manager Pat MacQueen compared Berlin to Mayberry several weeks ago. It’s ironic that so soon afterward there is a shooting that leaves one dead and one in the ICU. How is the local paper supposed to cover that? How is it supposed to tiptoe between the good and the bad in a community?
Berlin has lots of both. I’m constantly impressed with the city’s ability to rise above the devastating circumstances surrounding it, but at the same time I can’t ignore or stop reporting the bad. I would rather be covering the opening of ATV trails and new businesses than covering shootings, but I would be remiss if I did only one or the other. I’d rather be following the debate in city hall than avoiding the blood on Western Avenue.

So what is sensational? What is inappropriate? If some people want to know, and some don’t, who should the paper cater to? Normally these would be editorial decisions I wouldn’t be involved in, but because the Reporter is so small they are part of every story I cover. While most people will agree there is no value in a photo of a blood-stained door knob, what is the value of a story about incident that left the stain? How should the paper cover it? If it humanizes the people involved, does that treat ignore the crime they were attempting to commit? How do you tell the story of the life of the man that was shot to death when committing a crime? People sent flowers to his funeral, so some people obviously still care about him. I find it hard to believe anyone is all bad, but how do you do justice to all sides? How can a paper navigate those treacherous waters?
Those questions ought to be above my pay grade. In a small community like Berlin, however, they aren’t. The questions aren’t sensational, and the answers aren’t easy.