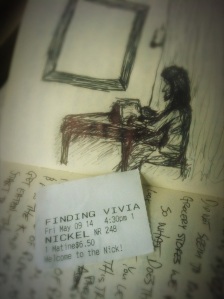 I wrote the last post while on the plane from New York City to Johannesburg. It is not a work of fiction. It was a story told to me a few hours before by a friend. The friend was driving up State Street in Portland, Maine, and crested the hill to see a man burning alive. The man was standing in Longfellow Square, at the intersection of Congress and State, engulfed in flames. The man had obviously lit himself on fire, and despite the flames he steadfastly refused to stop, drop and roll. Colin told me their eyes locked, and for a moment everything else stopped. The man was burning, and his last moments were spent in a visual embrace with someone sitting in a car at a stoplight. I couldn’t get that image out of my head, and as I flew it spilled out into my notebook.

About a week earlier I watched The Grand Budapest Hotel, the new Wes Anderson film. The movie was fantastic, funny and fun, but it was also more than that. The story is told through a writer, though it is not his story. It is the story of an old man and his youth. The writer, however, says he is never short of stories because people are always telling him theirs. His job is just to capture them. That’s how I felt with this. The story was Colin’s, but after he told it to me I knew I couldn’t just let it disappear. My version is not accurate from a journalistic standpoint—I did not take notes or probe Colin for details or fact check his account. Instead I took his story, which I believe, and filled in the details. I would not call it my story, because I merely retold Colin’s account. But it was a story that captured something primal, something real, that I wanted to tell. It had a power when he told it, and I wanted that power to keep rippling outward.

I’m not really sure why all that is at all important, other than it shares my process, my experience. There is no truth, and no one owns any of it. But the story is beautifully raw. It is a story worth telling.