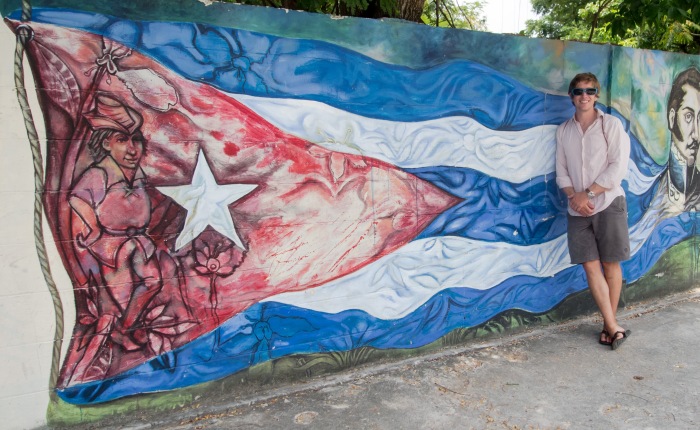 “How do you get there?” It’s always the first question whenever I tell someone I guide trips to Cuba. Maybe they’ve heard of Americans slipping in illegally through Canada or Mexico. Maybe they figure I’m doing the same.

The next line is also scripted: “Well, now’s the time to visit. Before the Americans get there and screw it up.”

To be clear, these aren’t Europeans, Canadians, or Mexicans I’m talking to, they are Americans. Most of them haven’t visited, but they know Cuba is opening, and they know when it does Americans are going to ruin it.

The Cubans I talk to aren’t so sure. When they hear “American,” they smile and reach with both hands. “It’s about time,” they say, eager to shake.

View Story
Cuba: An island seeks to connect
I hate to be the one to do this, but I’m here to tell you that the frozen-in-time utopia is not a realistic picture of present-day Cuba.

My job as guide to Cuba is a new one. Before last December, before President Obama announced reestablishing US-Cuban relations and loosening travel restrictions, just visiting could have landed me in jail. Even now the US government forbids tourists from going; our groups are classified as “people-to-people” exchange trips, and they require US Treasury approval.

There are no beach visits or snorkeling trips on our tours. We go to meet Cubans, experience the culture, and explore a country hidden behind 60 years of embargo.

That’s why participants go. I go to watch history unfold. If those Americans are right and we are going to ruin Cuba, then I am the leading edge of the invasion force. The destruction — the Starbucks, McDonald’s, and Marriotts — will come in my wake.

But despite the risk, Cuba’s excitement for what comes next is palpable. On our April trip, every time someone learned our group was American, they got excited.

“Do you think it will happen?” they said. “Will the blockade end?”

Then President Obama shook hands with Cuban President Raul Castro, and overnight we became celebrities. Whenever we were in the street and people learned we were American, they’d grab us.

“You’re Obama,” they’d say, grabbing our hands, “I’m Castro.” Then they’d shake vigorously, smiling. This didn’t happen once or twice. This happened a lot. Our group was there to meet Cubans, and the Cubans used the opportunity to re-create an emblematic moment of their expanding future.

It’s a moment that keeps moving forward: My last trip coincided with the US announcement it would reopen its embassy in Havana. Next time I visit, the embassy will be open. Things are changing fast.

But not everything. The streets are still flooded with 1950s Fords and Chevys, and the faces of Fidel, Che Guevara, and Hugo Chavez still loom large on countless murals and billboards. Soviet-style architecture still dots the Havana skyline, and when the sun goes down, crowds still swarm the Malecon, Havana’s iconic 8-kilometer seawall.

Cuba seems caught somewhere between the developing and developed world: Everyone has health care and a university degree, but buildings are falling down and basic goods can be scarce. But it’s that juxtaposition that makes Cuba remarkable. There are few places in the world where I would encourage people to go out after dark to wander the streets and look to strike up conversations, but social hour in Havana doesn’t begin until 9 p.m. and crime is rare. If “people-to-people” interaction means meeting Cubans where they are, then it begins at dusk on the Malecon.

Other parts of the Cuba experience, meanwhile, seem cribbed from old jokes about the ills of central planning: the three elevators in the upscale Habana Libre hotel that have been down for months; the stores that just keep running out of bottled water.

Then there’s the undercurrent of hard currency that lubricates every interaction; nothing happens without a few dollars exchanged in the palm of a handshake. There are two sides to this game: One is that the government pays so little, everyone must supplement their income with “tips,” the other is that without a contribution, you might be turned away next time. The restaurant might be closed. The tour could be cut short. It’s part of how Cubans get by, and after 60 years in the shadow of the embargo, Cubans know how to survive.

And that’s the truth I come back to each time an American tells me we’re going to ruin it. A half-century of sanctions, spies, and submarines didn’t succeed. Instead, that time taught Cubans to think on their feet, to adapt and endure. As the country opens, Americans will come — for both vacations and business ventures — and Cuba will greet them openly, with a handshake and a smile.

But I’m willing to bet it will still be Cuban palms that wind up filled with folded bills, and again without losing their island.

I’ll tell you for sure after my next trip. Or the next.

This story appeared in the Boston Globe in August of 2015.