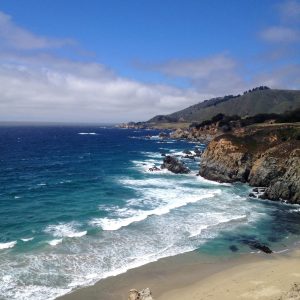 It’s a long drive from Monterey Bay to San Diego, punctuated by towering seacliffs and emptiness. It’s the kind of drive were you find yourself pulling over every five minutes, where the landscape looks sculpted by god. Big Sur. Kerouac’s coast. Every photo looks magnificent, but none are able to capture the spirit of the place.

I spent the morning at the Monterey Bay Aquarium, where you can pet a stingray, watch bluefin tuna and hammerhead sharks grow frantic around shimmering clouds of sardines, see hoards of jellyfish from inches away and marvel at octopus species so different one looks like graffiti and another like camouflage. It took hours to wander through the exhibits, past giant bass and sharks and sea anemones.

One small crustacean I barely took notice of was a shrimp. He was a few inches long, with a pair of lobster-like claws, one substantially bigger than the other. His name? The snapping shrimp. I definitely saw one stowed underwater and behind glass, but I barely took notice. It was just another weird little ocean creature, nothing as majestic as the large pelagic predators or as striking as the brightly colored fish. It was just a shrimp.

Then I started driving. I skirted my way out of Monterey, past Carmel and onto the Pacific Coast Highway. Hours clocked past. The landscape grew into lofty hills above an azure sea. First cell phone coverage faded, then the radio stations. “Next gas 62 miles,” the sign said.

But I come prepared for such terrain: I plugged my iPhone into the auxiliary jack and scrolled through my podcasts. Suddenly one of my favorites caught my eye—Radiolab.

The episode was called “Bigger than Bacon,” and it was about this strange sound emanating out of the ocean: a crackling, like the popping of bubblewrap. What was the culprit? Snapping shrimp!

But more amazing is the power of that sound, as well as the phenomena that accompany it. The snapping is masked by water, muffled, but in reality each snap is roughly 220 decibels, or about as loud as a jet engine. The claw closes at 60 miles an hour, but it occurs in a space so small something amazing happens: at the base of the ocean where no air sits, the snapping shrimp’s claw closes so quickly it forces away all the water, literally vaporizing it, creating a vacuum, an air bubble. Suddenly a void exists where previously there was none, a brief spot of emptiness created by a couple-inch-long organism.

And when the water rushes to fill that space it does it with a vengeance. Molecules slam into one another at such a pace that the space that was once a bubble heats up to 5,000 degrees, the temperature of the surface of the sun. On the seafloor. In the claws of a shrimp.

Seriously. This is no joke. This is real. Scientists even captured it on video:

But here’s the best part: as I listened I drove. And I drove. I drove past the pristine shores of central California, past Santa Barbara and Ventura and the megapolis of Los Angeles, to San Diego, to friends and surf and southern California beaches. I spent a week there, surfing, eating tacos and diving; swimming through Pacific waters in a mask, fins and snorkel, chasing sea lions and Garibaldi fish and leopard sharks.

And the whole time I heard snapping. Every time my ears broke the surface I heard it. I’d never noticed it before, never paid enough attention, but now whenever my head went underwater it was an orchestra. The shrimp were everywhere. I could hear the snapping of their claws at the surface, and when I dove it only got louder. I never saw them, but I could picture the little crustaceans scampering across the seafloor, smashing their claws together like Marvel Comic heroes generating plasma-like heat rays in their palms. The floor of the ocean was on fire, but only the shrimp could see it. And me.

(The full Radiolab is definitely worth a listen. Maybe on a drive?)