Drytooling is just what it sounds like — fun and worth doing, but not as good as the real thing.

One of the benefits of living and working in the Mount Washington Valley is even when weekday is synonymous with workday it doesn’t mean climbing is limited to weekends. I have a habit of luring partners in for dawn patrol sessions, only rather than skiing we make morning ascents of Repentance, Remission, Super Goofers or The Roof. In the summer it’s the opposite — cut out of work at 3:30 or 4 p.m. and spend the evening cragging on Cathedral. It’s a great program, and it keeps me sane Monday through Friday.

This time of year, however, the only ice is up high and the rock is too cold to grab hold of before noon. The only options are an early morning sprint up into Huntington, or an a.m. session in the Cathedral Cave.

Some deride the Cave as wet, dirty, chipped and glued. I, however, love it. It contains several projects that have been multi-year efforts for me, and it provides a consistent gauge against which I can measure my climbing. In summer Sanctuary, the obvious bolted prow, provides me hours of entertainment. In the winter, however, it’s The Devil and The Mercy that keep drawing me back. 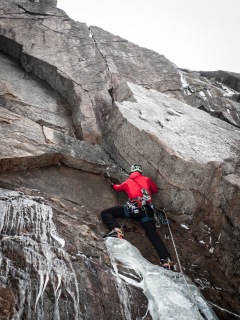 The Devil is the old standby — I could do the first section with my eyes closed, but The Mercy is the prouder line. The crux is three bolts up, with big moves on poor hooks past two more bolts. From there the hooks get more positive, but the climbing gets super-steep. It is exactly the loose-footed monkey-hanging that makes mixed climbing fun, only there isn’t enough ice on it to call it mixed climbing.

So I call it drytooling, and I have a blast doing it.

This morning I met Scott and Peter out there, and I started right up The Mercy. It’s been two years since I was on it, so I had to re-assess what I was getting into. On the first burn I spent too much time climbing and not enough time resting, and my warming up burn wound up sapping most of my juice. Scott and Peter each took quick runs on The Devil, and in minutes it was my turn again to jump on the sharp end.

Keep in mind, this is all at 7:40 a.m. or so. I have to be to work by 9. Peter is meeting clients at 8:30. Scott is the only one with the day off, but he was out late the night before with his wife. This was not a leisurely day at the crag, this was about building a pump.

I took my second burn, and the crux still had me confused. I took in the middle and tried to suss something out that would work. Hanging from a tool caught in a wobbly notch, I scraped around for the next placement. With both feet pressed out right I made a long reach to a torque crack that seemed to do the job. One more move got me to the fifth bolt, a small hook/steinpull that ushers in the steep climbing to the chains. The next three bolts went quick, and then I was clipping into the anchor.

I lowered to the ground surprised to have reached the anchor. One hang was the best I’d ever done, and though my arms were spent I knew it was within reach. The next go I just needed to see if I could get through the crux, I figured, and then when I came back fresh it would go.

Twenty minutes later I was roping up again, feeling even more spent but still psyched. I sprinted up the first three bolts and launched into the crux, floating upwards despite desperate hooks. I clipped the fifth bolt and realized I still felt strong. “This could go right now,” I thought. I leaned back on the steinpull and reached high for the next hook when suddenly I heard the scrape of metal and felt myself ejecting.

I was falling sideways, the full force of my steinpull adding to my acceleration. In a second the rope came tight, halting my waist, but my head, chest, arms, legs and tools kept falling. I felt a crack in my ribs as my body folded on itself. I was spinning sideways, hurting but laughing. There would be no send today.

I lowered to the ground, laughing, rubbing my side and shaking my head. “It’ll go,” I said, “but not today.”

The Mercy, it seems, and simple physics both wanted me to drytool for one more day.