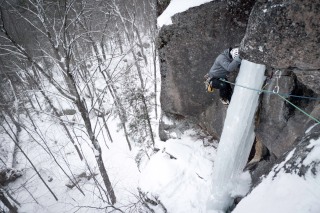 Each time I launch out past a screw or above a bolt, I pause, and as my harness goes above the gear a weight builds in my stomach. It pulls with twice the force of gravity, and with each move upward it tugs harder. Letting go, embracing the chaos, is not in my nature, but after more than a decade climbing I’m learning to acquiesce, to give in to the art.

I am not a soloist. I have never been a soloist. I’ll climb a handful of ice routes without a rope, like the gullies in Huntington and on Mount Webster, but none of the routes require being on my hands. On rock it’s the same — the only route I’ve ever climbed ropeless is Huntington Ravine’s Pinnacle Buttress. All my solos allow me to stay on my feet. That keeps me cool, keeps me from feeling out of control, keeps that weight in my stomach from overwhelming me.

The most glaring example of this happened last year, when I was working Sanctuary, a classic sport climb in the Cathedral Cave. My friend Pat asked if I was interested in taking a day to do some trad climbing. He wanted to check out Budapest, a classic Cathedral 11+ fingercrack. Sanctuary is 13b, and I had it wired. I was one-hanging it, so I knew I had power to spare. Budapest, I thought, would be a fun route to apply my sport climbing fitness to. 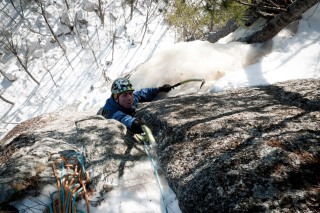 The only problem was I had developed route-specific climbing strength. I had power to spare, but only if I had the moves hardwired into my frontal cortex. Embracing the unknown, the lack of control, was not on the menu. I got into the crux of Budapest and battled for 30 minutes, but I was unwilling to climb into the ether. I hung on the gear because it was easier to let go with my hands than let my with my head.

That struggle continues today. When the ice gets steep or the holds turn thin I start thinking, reconsidering and processing. The end result is I overgrip, underperform and climb below my potential. Whether on trad or sport, ice or alpine, the hardest thing is to embrace the unknown, to continue upward regardless, to relax and embrace a lack of control, a lack of understanding. I am an engineer by nature, not an artist. 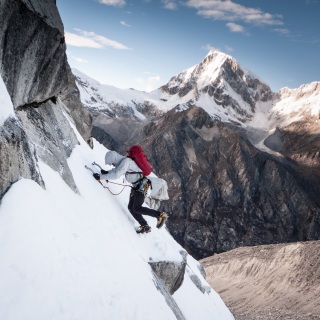 My regular climbing partner Michael Wejchert, meanwhile, is an artist. The mountains are his canvas, and routes, often solo, are his paints. A month ago on the way to Shagg Crag we got into a long discussion about what climbing is, and he pitched his Climbing as Art argument. I didn’t get it. I didn’t hear it. I was talking about safety and ensuring I am never risking death unnecessarily, while he talk about painting his masterpiece in granite, snow and ice. We were in the same car, but we were worlds apart.

Now, though, I see it. As I think about embracing the unknown, of cutting the tether that ties me to the ground, I get it. The art isn’t about unnecessary risk, it’s about embracing the unknown and seeing where it takes you. It is about swallowing that which scares you. It’s about squeezing that weight in your stomach and holding it close until it evaporates. It’s about cutting your ties to Earth and seeing where that leads you.

It doesn’t have to be solo — for me every time I launch above a bolt or a screw I face the chaos, and I get another chance to paint. Every onsight attempt is a brushstroke, a lesson in accepting the unknown. The point isn’t to summit, it’s to embrace the entropy and keep moving upward. Every ice route, screws or no, is a chance to renew my commitment to swallow disorder, to find the art. Even if at heart you think you are an engineer.