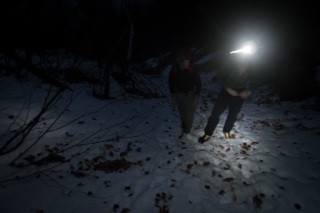 Well, it looks like ice season is over for me.

At 5 a.m. this morning I woke with Shoestring Gully caught in my head. I rolled over, fully intending to go back to sleep, but I couldn’t shake the thought of a morning uphill jog. I laid in the dark for a few minutes, trying to let the urge to run up 1,000 feet of snow and ice before work would subside. It didn’t. I got up and started pulling on synthetics.

An hour later I was driving north, headlights on, rocking out to Call Me Maybe. The thermometer read 36 degrees. The clouds squatted over the valley. “One hour,” I thought, “that’s all I need. If the rain can hold off for one hour I should be able to get up and back down.” The forecast called for rain all day, but thus far everything was dry. A hard shell sat rolled in my pack just in case.

As I hit the straightaway by The Notchland Inn, however, the drops began. I’d run the windshield wipers to clear mist on the way into the mountains, but these were the real deal droplets. The rain had come. I kept thinking of Mark Twight’s words: if water is running, things are falling. Not good. I turned around. 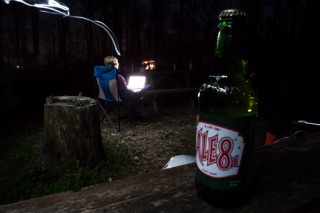 Friday I leave for two weeks in the Red River Gorge. By the time I get back from the Mecca of sandstone sport climbing it’s possible there won’t be anything left frozen. Today could very well have been my last opportunity, and I missed my shot.

I don’t mind, however. I realized the other day after a beautiful day at Shagg Crag that there is something I love more than climbing: early season climbing. It doesn’t matter if it is the first day of tugging on rock holds or the first day of scratching verglas with ice tools, the first day is the BEST. Climbing becomes brand new again for that day. Whether the switch is from rock to ice, or from ice to rock, climbing on that day becomes both an old friend and a new love — exciting, thrilling even, yet familiar. There is a newness, a wonder to the movement and the action, that comes flooding back on that first day, and with that newness come renewed commitment.

That moment is why I find myself scratching my way up The Black Dike in October or November each year. That newness is why if find myself postholing out to Shagg on the first warm day of March. It’s also why I dive at the chance to ski in February when the snow begins to fall in earnestness — newness brings clarity, even when the thing itself isn’t new, so long as I come with a renewed perspective.

That newness inevitably dulls over the course of the season, setting me up for a fresh launch into the next season. This week marks the transition from ice to rock, and as the Red approaches I can hardly contain myself.

As a side note, I’m interested to see how Shades of Granite changes now that ice season is over. It is question I don’t know the answer to. The risks of bolted sport climbing or even traditional climbing are very different than on ice. The struggles within me, however, are largely the same. Climbing above bolts allows a margin for error ice does not, but climbing into outer space is outside your comfort zone, regardless of the medium. Control is an illusion, on rock or on ice, and the goal is to embrace its loss.