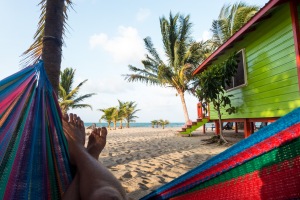 Storms roll in each morning just after sunrise. The thunderclouds sweep the ocean and crawl up the beach, prolonging the night and laying soak rain across the sand, palm trees, patios and walkways. But it never lasts, the Caribbean sun quickly burns through and turns the air into steam. Placencia summers are sticky and dense.

The town juts out like a thumb, surrounded on three sides by water. It’s a town of sand and ocean breeze and falling coconuts, a Belizean paradise. Pink and yellow cabañas dot the beachfront. A quiet walkway parallels the sea. Shops selling conch shell jewelry abut seafood stands. Placencia is the real thing, the kind of sleepy backwater escape first-worlders dream of.

But if that bustle marks opportunity, it is growth that leaves Belizeans behind. The realtors are expatriates, as are most restaurant owners, tour operators and even many shop and stand owners. The face in the window may be Belizean, but usually the owner behind them is not.

“They want to own everything,” one Belizean food stand owner told me, “and to tell us what to do.”

Belizeans smile and don’t let on about the tension, but if you ask they’ll tell you: the best of their country feels taken from them. Expatriates are the new colonialism. They own the resorts and restaurants and tourist businesses. They buy the land for cheap, developed it in ways no local could afford and then hire on the former owner at sharecropper wages. They sell to tourists and export the profits, leaving Belizeans marginalized, pushed aside in their own country and unable to afford a home in the towns they grew up in.

But no one will tell you that. Everyone is too friendly, too polite. You have to ask.

It’s not a dissimilar story to thousands of other tourism destinations, the skyrocketing real estate prices and the foreign investors/developers. But in Belize for some reason it feels different. The expatriate-owned properties are billed as ecoresorts, a term that conjures images of local cooperatives, not exploitive practices. That such sustainability-focused businesses are environmentally conscious but socially bereft (or worse, intentionally abusive) seemingly runs counter to their mission. The idea of an expatriate-owned business helping elevate overall economic standards seems an empty one.

Without the infrastructure built by such investment, however, there wouldn’t be much in Placencia. The tourism economy was founded by those expatriates, even as they changed it. The economic prosperity of the peninsula is intricately tied to those foreign-owned shops, restaurants and hotels.

How do you balance growth with economic prosperity? How do you ensure locals have access to the kinds of jobs that feed a future? Is it a business owner’s responsibility? Government?

Owners, it appears, aren’t doing it, but at the suggestion of government Belizeans laugh. “They’re as bad as the foreigners,” they say. Politicians in Belize are notoriously corrupt, and everyday Belizeans know better than to look to them for relief. If a big house on the beach isn’t owned by an expatriate it’s owned by a government official. The path out of poverty, it seems, lies elsewhere.

Perhaps it is in education, notoriously underfunded in Belize but a possible path to something other than displacement and servitude. The cost of high school, however, is borne by families, to say nothing of college. In a country of 300,000 it’s hard to spread the cost of public necessities. College is not in everyone’s future.

These are the quandaries hidden beneath white sand and rum drinks. They are the veiled problems of paradise. Belizeans know that Caribbean destinations are only desirable if they are warm, inviting, happy, and so they remain beneath the surface—to do otherwise would threaten the few economic scraps available. So any tourist with $40 U.S. can land a cabaña on the beach and stare at the stretching blue Caribbean, sip rum drinks near the lap of waves on sand.

But that is the tourist economy today—one of displacement and denial, an economic scramble that leaves behind more people than it elevates.

One thought on “Belize’s Tired Tourism”