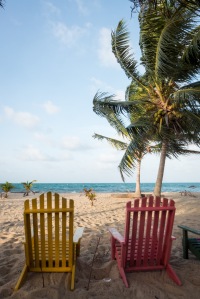 “Where are you from?” He was wearing a collared shirt, long pants with suspenders and a wide-brimmed woven hat. I sat next to him, sweating through shorts and a tee shirt in the Belizean heat.

“Where is that? Higher than Pennsylvania?”

“Yes, above Pennsylvania. Near Boston.”

“Does it touch Canada?”

He spoke with precision, like he was reading off a script. He addressed me directly, never breaking eye contact. His name was Elias. He was a Mennonite, a Christian sect similar to the Amish common to Belize. We were riding south out of Belmopan, the capital city, in a retired school bus with brown vinyl bench seats and windows that only slid halfway down. I was headed to the Caribbean coast. He was going home.

He smiled. He was 24, a farmer and one of 10 children. He lived with his family in central Belize, but he’d visited the United States a handful of times and had dual citizenship. His father left their church in Pennsylvania decades ago in a return to his core beliefs. His American community was using tractors and driving cars, Elias said, slipping towards modernity, so his father and a selection of others moved south, way south. They now farm tomatoes and peppers and corn, he said, in a community of 15 families.

“Did you go to Belizean school?” I asked.

“We have our own schools,” Mennonite academies separate from the national system, he said. “But we only study until eighth grade.” After that, Mennonite children become farmers.

“Do you ever feel like you are missing out? Ever think maybe technology and education and everything might be better?”

His answer was unhurried. “No,” he said. “I’d like to know more geography, to understand the layout of things better, but that’s about it. I don’t follow the world, really. And the pieces I hear about don’t make me want to take greater notice.”

“You have an election coming up, right?” he said.

“I don’t know much about it,” he said, “but it seems a mess. I don’t think I want a bigger part of that world.”

The bus lurched. I sat quiet. He had a point.

That’s why I love travel: It’s a mirror, a necessary step back for reflection. Only from a distance can you get a full view of yourself.

As a country, it’s no different — without adequate space it can be impossible to formulate an accurate view of your policy, your politics. Only in leaving can you see more clearly.
Another glimpse came from Karina, a Belizean mother of three. Every morning she sat outside the school. Inside, American high school students ran a summer camp for Belizean middle and elementary kids. Karina’s daughter was in the youngest class, made up of kindergarten and first graders. She would bawl inconsolably if Karina wasn’t nearby, so each day Karina sat at the picnic table outside the classroom.

Karina was black. She had grown up in central Belize not far from the school, and for the last two years she’d attended college in America.

“It was wonderful,” she said, “but hard.” She wasn’t ready for the racism, she said. As a Belizean she hadn’t developed the thick skin required of a black woman in America. Her culture is multiracial, but it lacks the divisions she encountered in the U.S. Encountering the stinging blows of prejudice as a young adult shocked her. She was unprepared for it. She would cry a lot, she said, and was hurt easily.

“I didn’t expect that,” she said. “I was happy to go to an American university, but it’s really nice to be back.”

These moments give pause. They are brief glimpses into the mirror of ourselves, of the country we have built: A Mennonite man with a middle school education who sees our politics clearly enough to know he wants no part in them. A young mother whose experience with American racism left her in tears. These versions of America grow fuzzy to those of us who live them every day. They seem impossibly entrenched and complex up close. But from abroad they look different. With the benefit of distance they seem both larger, more intertwined in the American fabric, and also smaller, more isolatable, more feasible to face head on.

At home, issues of race and politics seem too overwhelming to be changeable, too thickly American. But from 1,000-mile shores they become remote enough to appear moveable. They seem again to be in our hands, something within American control, within the control of the citizens who make up this country. They are ours to manipulate and eradicate if we chose. Racism is not part and parcel to this nation. The politics of money, fear and limited choice is not an inexorable American parasite that cannot be purged without risking the host. These are momentary glimpses of our country at this moment, they are not what define it.

This piece appeared in the Conway Daily Sun.