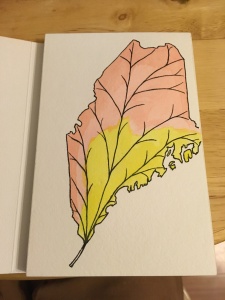 Maine is a modern political allegory. In a lot of ways it can serve as a stand-in for the entire United States—liberal coast hemming a vast but sparsely populated conservative heartland, with bustle and trade, vibrancy and a smattering of diversity along the shore but both tempo and complexion changing once you leave the ocean. Isolated pockets clustered around centers of higher education (rather than midwestern cities) retain the progressive flavor of coastal life, but otherwise inland culture is very different, as is the economic outlook.

America Mini: Yeah, we’ve got that.

And politically Maine has America covered too: one Republican congressman and the other rep a Democrat, in the U.S. Senate a moderate Republican regularly accused of being a RINO and an Independent who leans liberal. Maine voters, like voters across America, support every political stripe.

And then there’s the governor. If Maine is an American metaphor then loose-lipped Gov. Paul LePage is a glimpse into the future, a hint at what a possible presidency with Donald J. Trump would be like.

“I was Donald Trump before Donald Trump became popular,” Gov. LePage told a radio host last spring. And he’s right: Gov. LePage is a shining example of what loose cannon leadership looks like, how an executive who takes no notice of facts likes to govern. It’s impossible to watch the trapeze act of Trump’s campaign and not be reminded of Maine’s own mini-circus, the pro-business bark adorned by rude racist comments and a constant confusion on facts. Trump hardly has a corner on that market. LePage never had his own TV show but in terms of political buffoonery and chicanery he’s got a six-year head start.

How do candidates like this get to power? Of course there’s the business of third party politics and Maine’s 61 percent, but there is also that vast white interior, the working class industrial heartland of Maine/America, the places where good jobs were once plentiful and now are hard to come by. These are the forgotten lands where infrastructure is crumbling as quickly as communities. This is the seat of power for “straight talk” politicos today, the home of the frustrated white worker.

And why shouldn’t they be frustrated? These voters live in the economic sectors of yesteryear, places like Rumford and Skowhegan (Cleveland and Milwaukee) that have suffered setback after setback. They’ve watched their communities drown in joblessness while their elected officials lead in other directions and focus more on talking over them than talking to them. The American Dream, long at their doorstep, is now far away and doesn’t look to be coming back.

It is to those voters that politicians like Trump and LePage offer their promises: a rejuvenated working class and a reborn heartland. “Make America Great Again.” It’s a slogan aimed at them, and it has hit its mark. It may be hogwash, a fantasy in today’s changing world, but when no one else is speaking to this constituency there is room for LePage and Trump to find support. They took a read on the pulse of frustration among white working class voters and they spoke to it. Their words may be hollow, but any sound booms across a vacuum. They noticed a bloc and reached out; they should not have been the first.

LePage and Trump are blowhards, but their political foresight should not be overlooked. It’s now clear that white rural voters are ignored at our collective peril. While Maine and the rest of America quibbled over policy nuance these factless windbags climbed ranks: LePage won both election and then reelection, and Trump cleared the Republican field. Disillusioned and disenfranchised working class voters led the way, showing up in droves to exercise what power they have left, supporting the candidates that speak to their situation as everyone else looked on.

Maybe next time Republicans and RINOs, Independents and Democrats will approach this frustrated constituency, listen to what they have to say and speak to them. Maybe next time working class Maine’s sole option won’t be a bluster-filled bully.

Maybe that can be part of America’s story too.

This column appeared in this week’s Portland Phoenix.